He Who Is Without Sin Let Him Cast The First Stone:

We have the Governor of Virginia,  possibly in Black Face or a KKK hood. We have a POTUS  hugging  the KKK and a picture his parents with KKK emblems. We all have a past …Can we move forward and forgive-what is their character telling 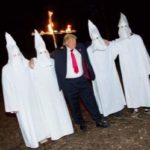 us about them today?

If we don’t come to terms with our past, none of us is going to be able to serve  our country in any capacity, from the  Oval Office to a Television Master of Ceremonies; even to serve in the military.

Grandmothers, mothers and women (gmw) of Virginia in particular and America in general , have you wondered if there’s outside collusion driving the turmoil in our Governor’s Office, over racist photos, or the chaos in Washington, Isn’t it strange how this confusion  is taking place in our highest offices of leadership. Do you wonder what other countries are smiling, at the anarchy brewing in America, and what country could take credit for our dysfunction.

Has 2nd chances become just a word to be used with examples we approve of? The Ralph Northam, pediatrician I met and help get elected to the Senate, is not a racist,  when he came to my church while on the campaign trail, he was  recognized  as a doctor who had touched the lives of so ‘many parents as their children’s pediatrician, who bought sunlight into their children  lives, that day the man in the  Racist Photo did not exist.

Democrats, GOP, Independence and Liberals,  we need to re-evaluate  our shot list of differences, and focus on the long list of things we have in common.  We are allowing ourselves to be divided.

Gmw we must carry the banner; (The Race Banner) so our children and the world can see it,  and know there is only one race; which is simply the HUMAN RACE.